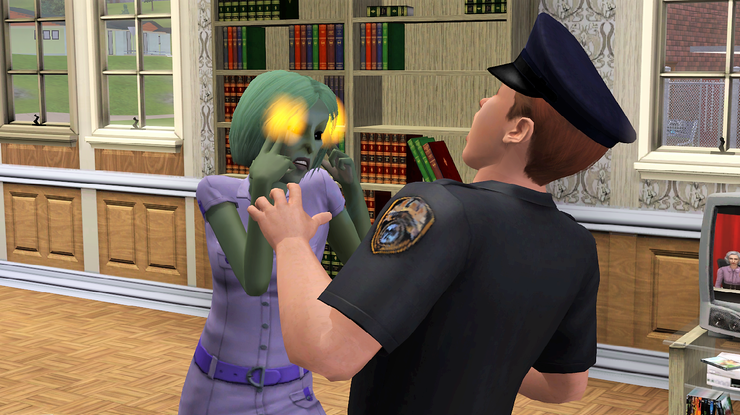 The Sims 3 alien powers include the brain power motive, mental scans, transmuting, mind control, re-combobulation, draining or boosting other Sims, probing, and the ability to drive a UFO. Plus, there’s a special career only aliens can have.

Aliens were introduced to The Sims 3 in the Seasons expansion. And for the first time, they were more than just humans with green skin. Now, they had their own set of abilities that made them more interesting to play.

These abilities are available to any full aliens in the game – visiting aliens you move in AND those born from abduction. Sim-alien hybrids will NOT have access to alien powers. (Abduction babies are always considered full aliens, not hybrids).

Sleeping offers no benefit to aliens. Although they can sleep if you direct them to, it will not restore their brain power.

Instead, click on your alien Sim and choose “Restore Brain Power.” The Sim will sit down somewhere and go into a “trance” with her mouth open and palms facing up. Strange lights float around her head as brain power is restored.

Alien Sims may autonomously restore their brain power when it drops too low.

Another way to restore brain power is by consuming space rocks, which you’ll have to collect out in the world. I always keep a few space rocks in my alien’s inventory for emergencies.

Click on a space rock and choose “Consume.” Your Sim will then consume the rock in an impressive display of light and power. I don’t know any other way to describe the process. Try it for yourself and see!

Tip: When searching for space rocks in the world, click on a rock and look for an option to “Consume (Provides a Small Amount of Brain Power).” You’ll know this is a space rock before you send your Sim across the world to collect it. If that option does not appear, the rock is not a space rock.

Using your Sim’s alien powers also depletes their brain power. Aliens need to rest and restore brain power after using their powers for too long.

If you’re not careful, an alien can become “mentally ravenous,” which decreases their mood by 50 points until they recover.

Before you do any heavy mental lifting, make sure your Sim’s brain power bar is full. Then, using their powers is as easy as clicking on a Sim or an object, depending on what you’re trying to do. See the sections below for how to use the individual abilities.

When your alien meets a new Sim they can “Scan” them to find out their traits. Click on a Sim and choose “Scan.” The alien will walk some distance away and use her powers to scan his mind.

The animation for mentally scanning other Sims is the same one used for bio drain and bio boost (see below).

Each scan reveals one trait about the Sim. You’ll have to scan a Sim multiple times to find out everything about them. And the best part is, the Sim doesn’t even seem to know they’re being scanned.

Click on your alien Sim and choose “Scan Object.” She’ll go find a random object to “scan” on the lot. In my experience, Sims usually go outside to scan objects. I’ve had my Sim scan trash cans, chairs, grills, tables, and even dirty dishes.

While scanning, aliens use some sort of extraterrestrial tablet/scanner to record data about the earthly objects around them. I assume they’re sending this data back to Sixam for analysis.

Transmuting precious metals and gems is another interesting alien power in The Sims 3. After collecting a metal or gem in the world, click on it in the Sim’s inventory and choose “Transmute.”

The Sim will levitate the rock in the air while sending brain waves into it (at least that’s what I imagine they are). After a few minutes of transmuting, you’ll receive a message that your Sim instilled the stone with “much alien love,” increasing its value.

You can transmute the same metal or gem multiple times to increase its value even more.

It’s possible for your Sim to fail at transmuting. If they fail, you’ll receive a message that says, “Transmuting requires great concentration. A good mood can lead to the best results!” Try again when your Sim feels better!

The Mind Control power is only available when your alien Sim is at home and guests are over. Use this power to transform a visiting guest into a servant for two hours. Just click on your target and choose “Mind Control.”

The Sim under the alien’s control will perform household chores for the entire two hours. They’ll make beds, do dishes, mop up puddles, clean toilets and sinks, etc. If there are no chores to be done, they’ll just stand around until time is up.

This is a good way to get your house cleaned for free without hiring a maid. Invite over Sims you don’t like very much and put them to work!

Tip: If your alien Sim and the target Sim are sitting down, the mind control option will not be available when you click on the target. They both must be standing for the interaction to work.

Aliens can “re-combobulate” broken items around the house. Instead of manually repairing things, they simply “zap” them with their big brain alien powers.

Click on a broken object and choose “Re-combobulate Broken Device.” Your Sim will walk over to the object, put one hand on their head, and outstretch the other hand. Then, they’ll send a beam of power into the object to repair it.

If an alien notices a broken object before you do, they may fix it autonomously. It’s always handy to have an alien around the house!

If you click on another Sim with your alien Sim selected, you’ll have a few new options, including bio drain and bio boost.

Choose “Bio Drain” and your alien will literally drain the other Sim’s social, hygiene, and fun motives, transferring them to herself over time. This effect lasts for one hour. During that time, you cannot boost or drain the Sim again.

After being drained, a Sim may get angry and insult the alien who drained them. So be careful with this interaction. My Sim drained her father, which upset him very much and they lost their friendship.

Bio boost and drain cannot be used on other aliens, only non-alien Sims.

Probing is more of a short interaction than a power or ability. If you click on a normal Sim and choose “Probe,” the alien pulls out a big, scary looking contraption with a needle on the end. Your Sim will cower in horror at the sight of it.

But after a moment, the scary needle disappears and a rubber duck with a feather attached appears instead. The alien uses the feather to tickle the Sim, and they both have a good laugh. Gotcha!

No actually probing takes place. I’m sure someone out there is very disappointed.

Alien Sims have access to the special UFO – also known as the Galaxa Space Car.

There are two ways to get the UFO in The Sims 3. Move an alien into the active household who already has one in their inventory. Or use the buydebug cheat to purchase one from the buy mode catalog.

If you meet, befriend, and move in an alien, look in their inventory and you should find the car there. Place it down on a driveway just as you would any other vehicle.

If you’re playing a born-in-game alien and you want them to drive the UFO, you’ll have to cheat to get one. Here’s how:

The space car hovers above the driveway, and doesn’t actually touch the ground. When your Sim drives, they teleport from the sidewalk into the car. Then, they levitate into the sky and dart to the destination in a trail of light.

Tip: Flying a UFO is a much faster form of transportation than taking a normal car or walking. Travel in the space car is nearly instantaneous. I highly recommend obtaining one for all your alien Sims!

Alien Sims are eligible for a special career that normal Sim’s can’t apply for – Test Subject. Click on the Science Facility in any world and choose “Get Part-Time Alien Test Subject Job.”

Since this is a part-time career, it only has three levels.

Work days are Monday – Friday, with weekends off. Not a bad gig!

What are your favorite alien powers in The Sims 3? I personally love driving the UFO and performing mind control on guests to do all my chores. Re-combobulating broken objects is nice, too. Leave a comment down below and tell us yours! 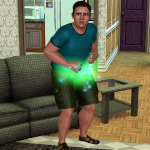 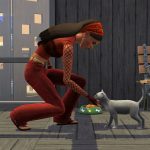